A Wander Round the Bridge Cottage Garden in May 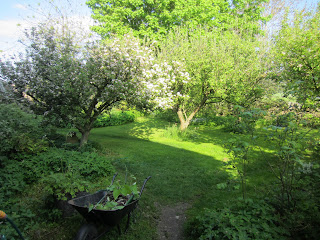 I thought, as it's been a wee while since I wrote a Bridge Cottage Way blogpost, I'd take you for a wander round the garden. It's now the end of May, and we've had a very slow start to the growing season, with snow and ice well into March and earlier in the month the heavens opened and we were deluged with a phenomenal amount of rain. 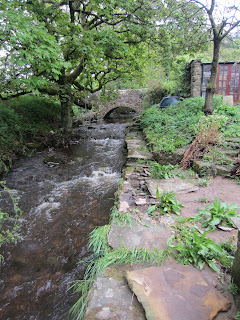 In actual fact, it rained so much two weeks ago, Bridge Cottage was marooned.  I was in Hexham doing a craft fair in the Abbey as The Woolly Pedlar and had to come home by bus and then walk across the scarily swollen South Tyne River over the green metal footbridge as the roads round and about were under water. Fortunately it's all gone down now, and indeed today is gloriously sunny, but I noticed the dry stone wall near the nature reserve down the lane had collapsed due to the flood water. You can see in the picture here that the Bridge Cottage barbecue sitty out bit has taken a battering, with stone paving slabs havng been lifted by the water. Touch wood, the water has never risen enough to come in the house, though we have been known to put sandbags out by the front door. That's the royal 'we' of course. ;-) 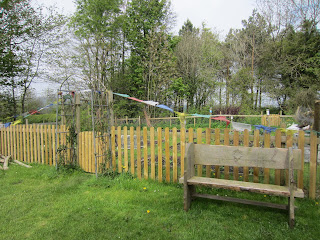 So, let's start our wander round the garden with the vegetable plot. We've had a new fence built around the perimeter by my good friend Hedley from Riverside Timber Products to keep the rabbits out. Unfortunately we got caught out over winter as we didn't protect the over wintering cabbages and brocolli and the pheasants took residence and munched their way through the lot. All except for one lone purple sprouting broccoli which has done us proud. 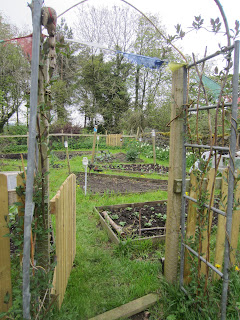 As you can see, we've planted some honeysuckle cuttings around the doorway to the veggie garden and have upcycled an old metal ladder into supports for it to grow round.

Earlier this month if you looked inside the veggie garden you would have thought it was early April, not the middle of May.
It really has been a very wet summer, followed by a very log cold Winter and a cold wet Spring which has meant everything is now a long way behind.
However, as the summer solstice fast approaches, the longer days and dare I say it, some warm sun on the odd occasion is tempting the garden into life. 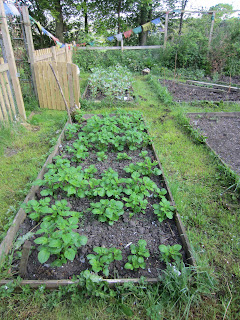 We've planted Maris Piper seed potatoes which are now at the stage where they need earthing up to encourage a good crop. You can read what I wrote last year about growng your own potatoes. Incidently, this post got thousands of hits - I wonder if it was because it featured my handsome husband?
Behind the potatoes you can see broad beans growing. I can't get enough of these little green gems - they are my favourite veg by far. I like to set them away in the greenhouse in March, then plant them out once the ground has warmed up. Once they have reached a decent height and the flowers have formed, it's a good idea to pinch out the growing tips to deter blackfy. 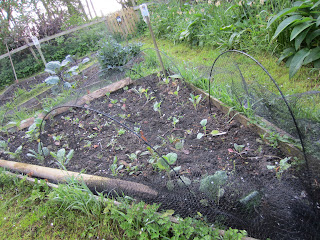 Another bed in the garden is now planted up with cabbages and sprouts, collectively known as brassicas and my husband has used the poles from a redundant tent to make supports for netting. It's so important to cover your brassicas early to keep off the cabbage white butterfly. If you don't you are providing a handsome feast for the miriad of caterpillars that will much their way through your crop. It also means you don't have to use chemical pesticides either. 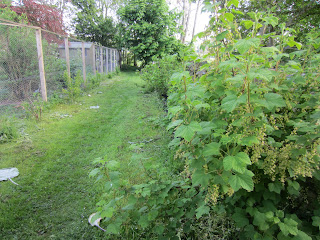 We've planted a 'soft fruit' corridor alongside the chicken run, with gooseberries down the left handside, and blackcurrants and redcurrants along the right. This ancient redcurrant bush you can see in the foreground never fails to give a bumper crop, and this year will be no exception. Once the fruit starts to ripen, I'll throw an old net cutain over the bush to keep the bird damage to a minimum. Soft fruit is wonderful and relatively easy crop to grow, bursting with vitamin C, and saving you lots of money.


The plants that went into the greenhouse in what is known round here as 'the back end' or autumn have served us well in this lean time before the garden crops are ready. We're now enjoying spincah, rocket, lettuce, kale and we were blessed with this amazing cauliflower, the best ever! 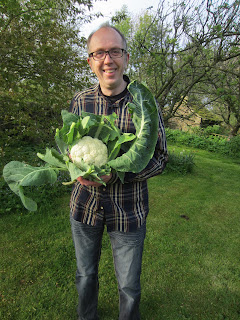 It's an exciting time of year as seeds are sown, seedlings planted up, and the garden is bursting to life. There is food for free in abundance too, with wild garlic and sorrel along the roadsides. I for one am really looking forward to some warm sunny days in the garden and the promise of summer.

Thanks for reading this post about the Bridge Cottage garden, and do feel free to read through the fifty two other posts I've written over the last few years. I hope you'll come with me through the journey of the seasons this year as we continue to consider how we can live our lives as sustainably as possible, reducing the burden on the planet's precious resources.